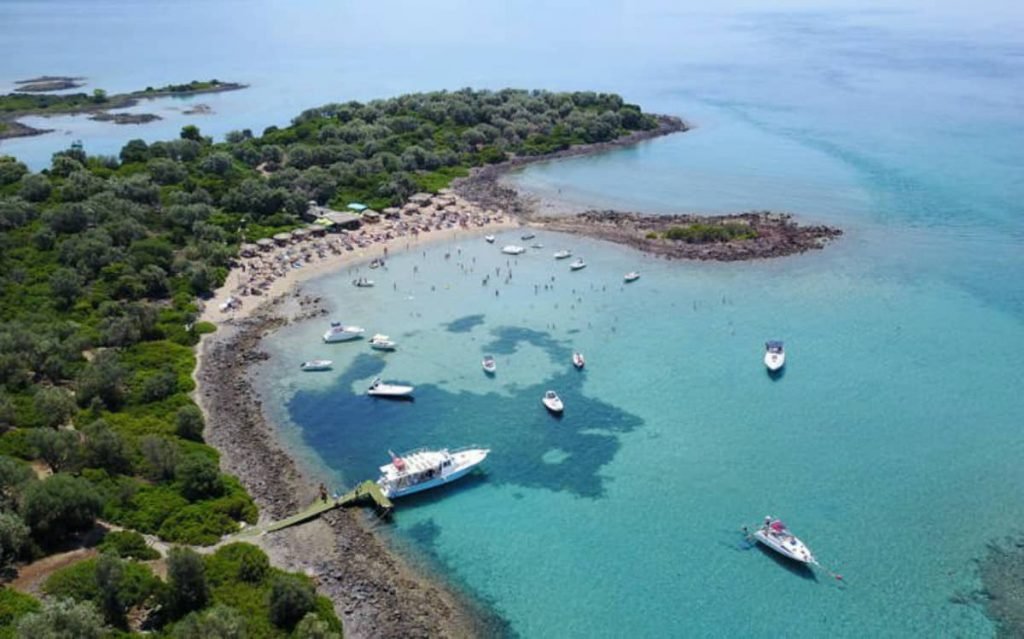 The complex of islands is the creation of volcanic energy and forms a single volcanic formation. The volcano operated during the Quaternary period of the Caenozoic century of the prehistory of the earth. Before the Maliakos tectonic precipitation took place, the Lichdonisia were joined to the Lichada peninsula. Large parts of the islands were sunk by a major earthquake in 426 BC …

According to mythology, Lichadonisia were formed by the body of Licha. Dihanièra, the wife of Hercules, thinking that he was cheating on her, sent him with Licha a poisonous chiton . When Hercules wore the chiton, he suffered from terrible pains and furiously grabbed Licha and hurled him into the sea. From the members of his body were formed the Lichdonisia. It is also said that the Great Round is his head.

Lichadonisia is located on the northwest side of Evia, between the Maliakos and the Northern Evoikos bay, on the extension of the ancient Cape Kineo, across from the settlement of Kavo. Opposite Cape Knimida, Fthiotida.

They consist of the Monolia of the Great Round, the Little Strongy, the Steno, the Vaya, the Voria, the Port, and other small deserts and mills known as Ponticons.

The Big Round is the southernmost of the cluster. He took his name from his round shape. It is a verdant island. The islet protrudes abruptly above the surface of the sea and must be the top of an undersea volcano. A lighthouse is installed.

The Monolya islet is elongated and has a small bay that serves as a natural harbor.

On 28/12/1836 the administrative division of Evia was published for the first time, and the Lichadonisia belonged to the municipality of Limodion.

On 18/12/1920, the Lichadonisia were identified and subjected to the community of Lichachos (there is no mention of their abolition).

This website uses cookies to improve your experience while you navigate through the website. Out of these, the cookies that are categorized as necessary are stored on your browser as they are essential for the working of basic functionalities of the website. We also use third-party cookies that help us analyze and understand how you use this website. These cookies will be stored in your browser only with your consent. You also have the option to opt-out of these cookies. But opting out of some of these cookies may affect your browsing experience.
Necessary Always Enabled
Necessary cookies are absolutely essential for the website to function properly. This category only includes cookies that ensures basic functionalities and security features of the website. These cookies do not store any personal information.
Non-necessary
Any cookies that may not be particularly necessary for the website to function and is used specifically to collect user personal data via analytics, ads, other embedded contents are termed as non-necessary cookies. It is mandatory to procure user consent prior to running these cookies on your website.
SAVE & ACCEPT